From TTWiki
Jump to navigationJump to search

Normally, what you can build on slopes (sides of a mountain) is very limited, tracks and roads can only be parallel to the incline, not in any other direction.

With this switch, you will have more options for things to build on sloped tiles:

One very useful side effect of this is that you can now build stations over several height levels.

Simply place for example one or more train station platforms, then add other platforms or other station facilities next to it, on the higher level. Adding more platforms of course only works if largerstations is on, and only if the lengths and orientations match.

The AI players would be of course unable to connect tracks and roads built on foundations properly, so they're not allowed to use this feature, except for placing their HQs and airports.

This patch was contributed by Marcin Grzegorczyk. 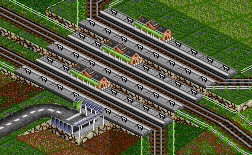