Originally by Cornelius of TT-forums, edited and put on Wiki by Jonty

A station tile will always comprise of at least three sprites: the track base, the 'background' and the 'foreground' (fig. A). 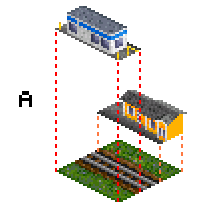 While you could present a station graphic to be coded with the foreground and background on the same sprite (fig. C) this will only make life harder for the coder as they will have to seperate the two in order to do their coding magic.

So for each type of tile in a station you need at least two seperate sprites for the foreground and the background.

Now we've got that out of the way, here's a tutorial on how to actually draw the sprites:

1. Start by drawing the base of the background sprite in the shape that you want. For instance, in passenger stations, the platform is a few feet off the ground so that people can get on the train without climbing a ladder up to the carriage floor. On the other hand, in goods stations, the platform may be lower, or on the ground. In a wood loading station there's not likely going to be a platform, just muddy ground.

2. Then, add texture to your platform by using a Pixel Randomiser (a feature in good drawing applications where you select a group of colours and it randomly uses different ones). If you don't own a top-of-the range drawing application, and just use something like Microsoft Paint, then click random colours and do it that way.

3. Next, decide where the features on your platform are going to be. It may help to put a black spot where you are going to put lamp posts, and to draw the outline plan of a building before you actually draw it in whole.

4. Now, draw the actual buildings and other things you want to put on the sprite. Remember that we're still on the background! If you want to draw something that goes over the whole tile, draw the tower in the background, and the rest in the foreground. That way, trains will go under it.

5. Then, add texture to the structures, remembering that the light comes from the bottom-right in Transport Tycoon. That means that you have to draw the left side of the buildings in the shade, darker than the right side.

6. Finally, do the same thing for the foreground platform. If you want to draw a one-sided station, don't do the foreground, or draw some dirt instead.

That's about it! If you've got this far, post your station in the TTDPatch Graphics section, maybe in the Project Generic Stations thread, and I'm sure someone will code it into the game.