Drawn by Oz, improved and snowed by George 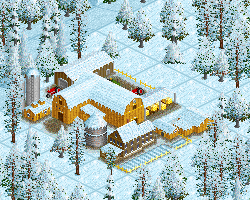 The Farm is the part of the ECS Agricultural Vector.

The Farm accepts Fertilizer and Vehicles if defined.

The Farm does not accept any cargo during first 93 days of life if built in game.

The Farm does not accept any cargo if it is in town zone 0.

The Farm does not produce any cargo during first 93 days of life if built in game.

To calculate a month production values should be summarized for all the cycles of the month (usually 8 or 9). The following calculations are given for one production cycle.

Farms production depends on the following factors: Fertilizer waiting, Vehicles waiting and snow line. Each factor may halve production or stop it.

If the Farm has no machinery units then production will be halved (if machinery is not defined then this factor is ignored).

If the Farm has less than 2 tones of fertilizer waiting then production will be halved.

These factors can make production as low as 12.5% of the maximum, or stop it entirely in the case of snow.

Production is represented in the table below.

Note: Even though we talk about production being "halved", the values are actually calculated with a more complicated formula, so the effect vary from 0.5 up to 0.67.

Production change happens on the 1-st day of every December.

The Farm does not change production level during first 93 days of life if built in game.

On the lowest production level (Very low or 3%) advanced closure mechanism is applied with the following protection conditions:

Production change happens according on amount of cargo transported. Every year the industry summarizes the transportation level of the preceding months, scoring "-1" if less than 50% of produced cargo was transported, "+1" if more than 75% was transported and "0" for 50%-75%. Then in December it tests the result; if it is above 4 then production is increased, above 6 increases it twice, and below -4 decreases production. There is always 6% chance that production will remain the same, regardless of the cargo shipped.

Attention! If the industry is inside a town zone 1, it always generates a "decrease production" event.

The Farm has one of 6 possible layouts. New layouts are welcome (:biggrin:)

The Farm can not be built by a player in a game. It should be prospected instead. It has 75% probability to be prospected. Prospecting cost factor is 255. Construction conditions for SE and map generator are represented in the table.

When prospected by the player during a game, the Farm will be in company colours of the builder. When generated by the game or built while in the scenario editor, the Farm will pick up the colour randomly.

The Farm is covered with snow when located above snow line. The Farm supports company colours.

If nearby lands are not covered with snow the Farm places fields on it.