From TTWiki
Jump to navigationJump to search

Drawn by andythenorth, snow by Irwe, improved by George 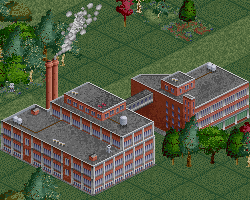 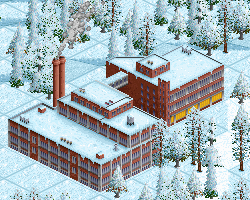 The Tinning factory is the part of the ECS Agricultural Vector.

The Tinning factory accepts Livestock, Fish and Steel if defined.

The Tinning factory does not accept any cargo during first 93 days of life if built in game.

The Tinning factory does not produce any cargo during first 93 days of life if built in game.

The Tinning factory has the production, represented in the table (production data is calculated for 8 cycles a month. During game play, there are 8 or 9 cycles, while the total amount of distributed cargo is adjusted with property for minimal amount of cargo distributed).

The production in the table calculated with assumption, that all lines process one cargo (livestock or fish). In fact every line can process one of them, so, the total production can vary between values for processing livestock and fish. The first line is always processing livestock, the second always processes fish. Other lines can process any material, and process livestock by default.

If the amount of one cargo waiting (livestock or fish) is ten or more times higher, then the other, every triplet of lines (lines 3..5, 6..8, ..., 24..26) that consists of lines, which do not change the state currently, forces one of lines to change production from second cargo (least cargo waiting) to first (most cargo waiting).

On the lowest production level the missing cargo would be taken from internal resources to produce about 16 units of Food.

The Tinning factory does not change production level during first 93 days of life if built in game.

Changing production level is calculated by comparing the sum of Livestock and Fish waiting with the value, represented in the table.

The Tinning factory has one of 4 possible layouts. New layouts are welcome (:biggrin:)

The Tinning factory can be built by a player both in a game and in the scenario editor. Construction cost factor is 192. Construction conditions are represented in the table.