Drawn by George, inspired with brewery by MHz 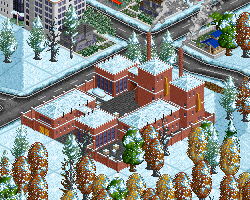 The Brewery is the part of the ECS Agricultural Vector.

The Brewery accepts Cereals, Fruit and Glass if defined.

The Brewery does not accept any cargo during first 93 days of life if built in game.

The Brewery produces Food and Fertilizer.

The Brewery does not produce any cargo during first 93 days of life if built in game.

Glass is a must cargo for production. Also the industry can't produce any cargo from Glass without Fruit or Cereals. On the lowest production level the missing cargo would be taken from internal resources to produce about 16 units of Food. The Brewery production is shown in the table (production data is calculated for 8 cycles a month. During game play, there are 8 or 9 cycles, while the total amount of distributed cargo is adjusted with property for minimal amount of cargo distributed).

The Brewery does not change production level during first 93 days of life if built in game.

Changing production level is calculated by comparing the min (Cereals/Fruit, Glass * K) with the value, represented in the table. K = 7/16 for Cereals, 5/16 for Fruit

The Brewery has one of 11 possible layouts. New layouts are welcome :)

The Brewery is covered with snow when located above snow line. The Brewery supports company colours.